What if we kicked Cthulhu's arse? - part 1 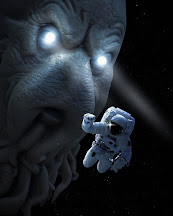 Part 2 of this article is now up here.

A campaign idea that starts from the point where we win the Cthulhu Mythos.

Mythos fiction is some of my favourite fiction, but you have to admit it's dark. The setting comes with the explicit knowledge that some day, probably sooner rather than later, the stars will be right and the Great Old Ones will rise. The human race will collectively go mad under Cthulhu's psychic influence and turn on each other in ecstatic slaughter.  If we survive at all, it'll be as just another lowly servitor race to Big C. And with the Mi-Go interested in Earth's resources, shoggoths hating us for not being them, Lloigor malice, Nyarlathotep's games, etc.... that's probably the best outcome we can expect. Dark.

Something I enjoy is taking nihilistic settings like this one and extrapolating what they would be like if we solved all the existing problems. And introduced a few new ones so they're still interesting to play.

Your mythos may vary. There have been so many writers involved that you have to to pick and choose. Lovecraft gets in, obviously. Also Ramsey Campbell, Frank Belknap Long and August Derleth (although I don't give any credence to his shuffling of Great Old Ones into neat elemental associations).

Leading up to World War II it became impossible to ignore the growing scientific consensus that the Earth had been, and still was, inhabited by immortal superbeings from the stars. With the formation of the UN in 1945, a joint office was created to investigate the threats and opportunities these beings presented for the whole human race. Earlier witnesses to the activities of non-terrestrial intelligence had been educated, imaginative and perhaps a little over-sensitive. The office (officially called only 'November') was staffed with with smart, brave, committed and armed agents with little or no imagination. They were very successful.

Cthulhu is still asleep in R'lyeh and may never wake up, because he's been lobotomised. In 1968 a coalition of nations positioned a sea rig over the city and dropped a shaft through which they set up the pacification device. Teams of engineers dosed with anti-psychotics and mood stabilisers built it, working in 90-minute shifts. It used the power of several timed miniature nuclear detonations to drive tungsten alloy javelins into the Star Beast's brain. As long as he remains alive, the spells sealing the Star Spawn in their chambers remain strong and active. And he's an important resource: we've literally sunk wells into him to extract dreamstuff.

Dreamstuff has three benefits. First, it allows things to cross over from the Dreamlands to the waking world. All kinds of artefacts have been retrieved and studied, advancing human science in unexpected directions. Secondly, it allows the human mind to remain human when it goes into space and passes outside the range of Cthulhu's influence. The human race evolved inside his telepathic sphere. Our creativity and innovation come from him. Away from him we revert to passive beings with no initiative or imagination, fit to be hunter-gatherers and not much more. And thirdly, it can be used to instil human qualities like compassion, conscience and fellowship in non-human minds. Qualities that don't arise in other races because given the nature of the universe, those motives are quite insane.

Artificial consciences have made it possible to recruit help from sources that wouldn't otherwise give it. After scouring the Antarctic continent for more preserved specimens, a small colony of revived Elder Things has been established. They're putting their brilliant minds and biology expertise to work on our behalf.

There's also a Mi-Go colony. None of the 'converts' are scientists, but they all have experience using lightning guns and refining the mysterious Tok'l metal. That's a productive partnership as well. Science has duplicated the ability of Mi-Go wings on a larger scale, making interstellar travel possible. Nearby solar systems have been explored, and a couple of cautious expeditions have made their way as far as orbiting Fomalhaut and putting observation satellites in orbit above Carcosa.

In both cases, the aliens are working with some of the greatest minds from human history - Einstein, Newton, Bohr, the Curies and others. They're restored through the mysterious Curwen-Waite process, performed under conditions of heavy secrecy in government labs.

The Great Race of Yith are more interested in humanity's collection of esoteric knowledge than ever, now that it's centrally archived and indexed. Compartmentalisation and multi-key requirements have made it difficult for their agents to simply walk in and take what they want, so they've agreed to a reciprocal arrangement - in exchange for access, they allow the human minds they swap into Yith bodies to retain their memories of browsing the Yith archive. It's not easy to remember the details, so the swaps get extensive memorisation training.

The Liao chemical has been redeveloped and mental exploration of the past is slowly developing into a science. Chrononauts have refined techniques for avoiding the angles of time, but some of the early experimenters are permanently restricted to buildings where all the walls meet in curves to block entry to the Hounds of Tindalos. Capturing specimens for study has been difficult.

The Flying polyps erupted from under Australia in 1980. Despite the country's military precautions, they cut a genocidal swathe across the continent. It took a series of nuclear airbursts to change the course of the war, and eventually they retreated back underground. UN forces followed them down. Despite obvious intelligence they were either unable or unwilling to communicate. Every attempt to force terms for a surrender became a battle, and eventually the last of them was finished off.

The Cthonians have become nearly irrelevant. Tracking their movements via seismic readings is trivially easy, and the human race has developed tunnel-crawling robot bombs and sonic weapons that cause them intense pain if they get too close to the surface. They've retreated deep into the Earth's crust and ignore the surface-dwellers.

In England, Glaaki has been captured. The lake has been dredged and all of its servants destroyed. Glaaki itself is imprisoned for debriefing. The creature is brilliant, but also quite twisted. Interrogation is a slow process.

Eihort wouldn't let herself be captured, so she was killed instead. Dissection has exposed more mysteries than answers, but biologists are fascinated by what they've learned.

Y'golonac was disposed of with rocket-propelled grenades one cold March afternoon in Bournemouth, England.

Every few years another Nyarlathotep avatar is identified. Esoteric researchers believe that the avatars are attempting to manipulate Humanity into a catastrophe which will serve as the sacrifice for a ritual to get Nyarlathotep's true attention, after which he will summon Azathoth to this life-rich corner of the galaxy to feed. November has a kill-on-discovery policy. So far the Outer God seems unaware of what's happening to his smaller selves.

All this is in service to Earth's Grand Project: the stars must never come right, even if it means destroying the significant ones.