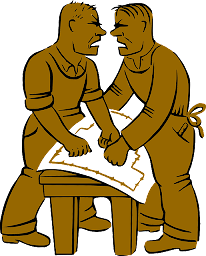 Ask ten people what the OSR is and you're likely to get 10 + 1d6 opinions for your trouble. So why ask? You can get those opinions and many more by rolling on the table below!
The OSR is made up of...
1. Old-school grognards
2. Wild-eyed rules hackers
3. Posing art-wonks
4. Fun-hating pedants
5. Mouldering grey-beards
6. Chattering children
playing...
1. Gary Gygax's Chainmail rules
2. un-houseruled OD&D
3. a heartbreaker ruleset from a particular weekend in 1970, preserved like a fly in amber
4. something new-school with an art style somewhere between psychedelic and heiroglyphic
5. an original ruleset that everyone agrees 'just feels' OSR (by which they mean their characters get killed a lot)
6. a Frankenstein's monster of rules that don't fit with each other, pulled from half a dozen of their favourite OSR titles
with...
1. Jeff Rients, passed out in a beanbag surrounded by copies of his carousing rules, occasionally mumbling "level fiddy, mudderfuckers"
2. SWORD DREAM tinkerers who want to replace all their stats with usage dice
3. six pear-shaped guys with real metal swords they forged from beer cans HEY WATCH WHERE YOU'RE SWINGING THAT
4. a couple who brought their teenagers because they can't be trusted at home alone
5. Dave Arneson's actual corpse
6. eight college students who still think this is 5E
and are 'led' by...
1. an elite group who've played in con games GMed by Gary G and have photographic evidence
2. a cabal of self-publishers who cracked the code for selling platinum on DrivethruRPG
3. a demented group who argue that Cops 'n' Robbers is the original RPG, but only if you didn't let girls play
4. scruffy basement-dwelling contrarians who just want to be in opposition to everyone
5. purists who don't play any game available in PDF or POD
6. nostalga-junkies who remember the 70s as a better time
but actually led by...
1. Rosicrucians
2. Freemasons
3. the Kickstarter board of directors
4. a rogue CIA cell locked in proxy combat with a rogue KGB cell since 1990
5. a millennial cult sifting the errors from millions of furiously typed forum comments for prophecy
6. Arnold K from a hidden base in the caldera of an active volcano commanding an army of crowdfunded drones armed with scalpels
with the goal of...
1. destroying storygames forever.
2. inoculating the next generation against social media-triggered political madness.
3. making a quick buck the hardest way.
4. assembling a critical mass of brain matter conditioned to simulate fantasy worlds. The harvest begins next year.
5. winning a bet.
6. sorry, only the even secret-er cabal knows that.
Posted by spittingimage at 08:30

Email ThisBlogThis!Share to TwitterShare to FacebookShare to Pinterest
Labels: tables